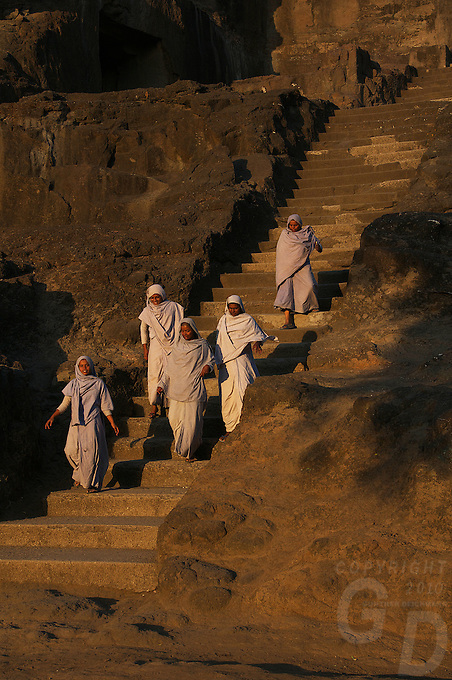 Aurangabad, India.The famous Ellora caves are located in the lap of the Chamadari hills. These historical caves are regarded as world heritage and are situated 18 miles northwest of Aurangabad. .A wonderful example of cave temple architecture, the world heritage Ellora caves own elaborate facades and intricately carved interiors. These carved structures on the inner walls of the caves reflect the three faiths of Hinduism, Buddhism and Jainism. These exotic caves were carved during 350 AD to 700 AD period. .Ellora caves are hewn out of basaltic rock of the Deccan trap, and are datable from circa 5th century A.D. to 11th century A.D. In all 34 caves were excavated here out of which Cave 1 to 12 are Buddhist, 13 to 29 are Brahmanical and 30 to 34 are Jaina. Cave 10 in Ajanta Caves contains the oldest Indian paintings of historical period, made around the 1st century BC.

These paintings beautifully depict various events in the life of Lord Buddha. All the caves are divided into two categories namely the Chaityas or the shrines and the Viharas or the monasteries. Chaityas were used to worship Lord Buddha while the Viharas were used by the Buddhist monks for their meditation
© Gunther Deichmann
9_India_Ajanta & Ellora Caves
Aurangabad, Buddhism, Historical, Archaeology, Caves, India, Culture, Old, Paintings, 2nd Century B.C., Carvings, Ajanta, ancient, Buddhist, Ellora, Jai, shri krushni, panth, mahanubhav, pantheist