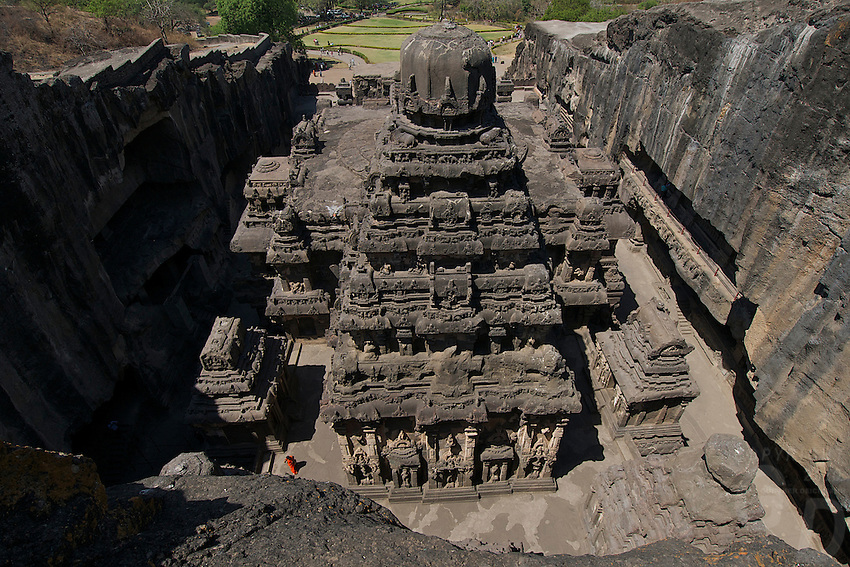 Kailash Temple at Ellora Caves Aurangabad, India.Kailash Temple, also Kailasa Temple is one of the 34 monasteries and temples, extending over more than 2 km, that were dug side by side in the wall of a high basalt cliff in the complex located at Ellora, Maharashtra, India. Of these 34 monasteries and temples, the Kailasa (cave 16) is a remarkable example of Indian rock-cut architecture on account of its striking proportion; elaborate workmanship architectural content and sculptural ornamentation.. It is designed to recall Mount Kailash, the abode of Lord Shiva[2]. While it exhibits typical Dravidian features, it was carved out of one single rock. It was built in the 8th century by the Rashtrakuta king Krishna I..The Kailash Temple is notable for its vertical excavation-carvers started at the top of the original rock, and excavated downward, exhuming the temple out of the existing rock. The traditional methods were rigidly followed by the master architect which could not have been achieved by excavating from the front. The architects found to design this temple were from the southern Pallava kingdom.. Cave 10 in Ajanta Caves contains the oldest Indian paintings of historical period, made around the 1st century BC.