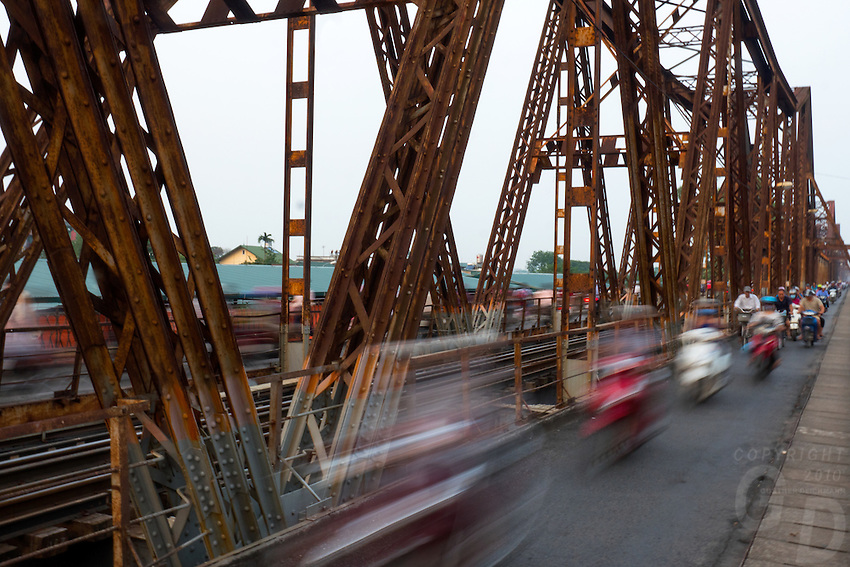 The bridge was built in 1899-1902 by the architects Daydé & Pillé of Paris, and opened in 1903.Before North Vietnam's independence in 1954, it was called Paul-Doumer Bridge, named after Paul Doumer - The Governor-General of French Indochina and then French president. At 1.68 kilometres (1.04 mi) in length, it was, at that time, one of the longest bridges in Asia. For the French colonial government, the construction was of strategic importance in securing control of northern Vietnam. From 1899 to 1902, more than 3,000 Vietnamese took part in the construction.
It was heavily bombarded during Vietnam War due to its critical position (the only bridge at that time across the Red River connecting Hanoi to the main port of Haiphong). The first attack took place in 1967, and the center span of the bridge was felled by an attack by 20 USAF F-105 fighter-bombers. CIA reports noted that the severing of the bridge did not appear to have caused as much disruption as had been expected. The defence of Long Bien Bridge continues to play a large role in Hanoi’s self-image and is often extolled in poetry and song. It was rendered unusable for a year when, in May 1972, it fell victim to one of the first co-ordinated attacks using laser-guided "smart bombs".
© Gunther Deichmann
2016_1_Vietnam_Hanoi_Ninh Binh_Ha Long Bay
Hanoi, Vietnam, Bridge, Long Biên Bridge, traffic, movement, historical, city, Red River, Hoan Kiem, Long Bien, Paul Doumer Bridge, Architects, Daydé & Pillé of Paris, France, Architecture, Vietnam War