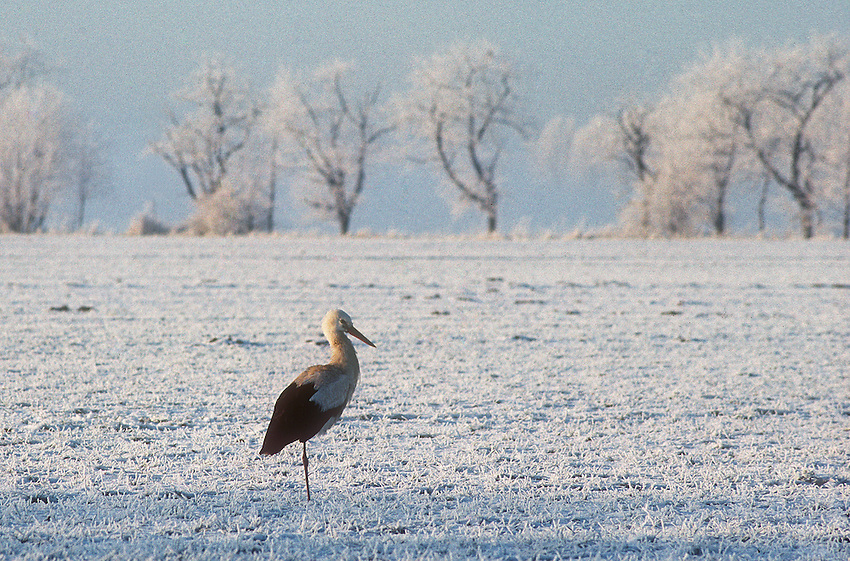 A rare site of a White Stork (Ciconia ciconia)in the winter in Germany they normally migrate to warmer countries like Africa before the winter. A large bird in the stork family Ciconiidae. Its plumage is mainly white, with black on its wings. Adults have long red legs and long pointed red beaks, and measure on average 100–115 cm (39–45 in) from beak tip to end of tail, with a 155–215 cm (61–85 in) wingspan.

However, birds ringed in Germany have been recovered in western (Bikaner) and southern (Tirunelveli) India. An atypical specimen with red orbital skin, a feature of the Oriental White Stork, has been recorded and further study of the Indian population is required.

White Storks fly south from their summer breeding grounds in Europe in August and September, heading for Africa. There, they spend the winter in savanna from Kenya and Uganda south to the Cape Province of South Africa. In these areas they congregate in large flocks which may exceed a thousand individuals. They arrive back in Europe around late March and April, after an average journey of 49 days. By comparison, the autumn journey is completed in about 26 days. Tailwinds and scarcity of food and water en route (birds fly faster over regions lacking resources) increase average speed
© Gunther Deichmann
Germany - Winter Umbrellas in Snow, Creative, Spring Time, Frozen Trees, Aerial
rare, White Stork, Ciconia ciconia, winter, Germany, migratory, warmer, countries, snow, Africa, winter, animal, bird, stork