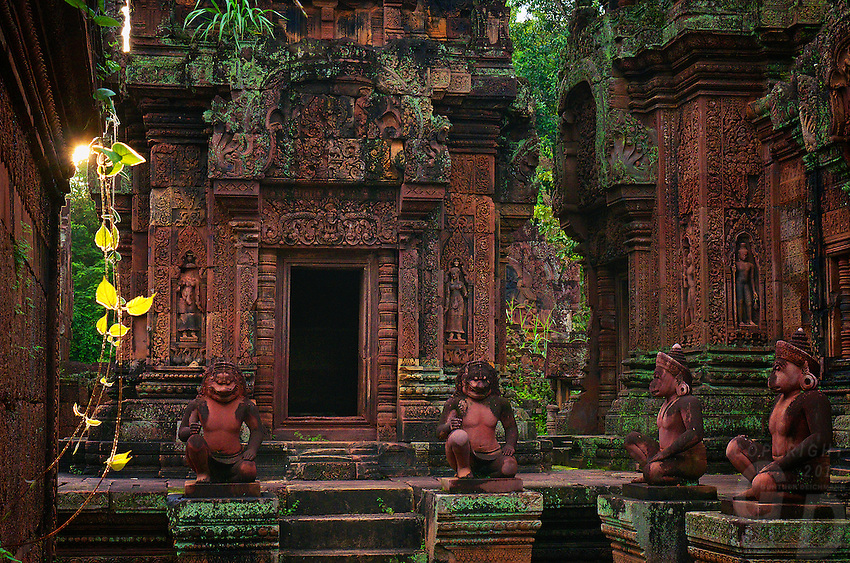 Banteay Srei during the wet season glowing in the last light of the afternoon.The temple of Banteay Srei or the Citadel of the Women.

The special charm of this temple lies in its remarkable state of preservation, small size and excellence of decoration.
The unanimous opinion amongst French archaeologists who worked at Angkor is that Banteay Srei is a 'precious gem' and a 'jewel in Khmer art'. Banteay Srei, as it is known by locals, was originally called Isvarapura, according to inscriptions. It was by a Brahmin of royal descent who was spiritual teacher to Jayavarman V. Some describe it a s being closer in architecture and decoration to Indian models than any other temple at Angkor. A special feature of the exquisite decoration was the use of a hard pink sandstone (quartz arenite) where enabled the 'technique of sandalwood carving with even an Indian scent to it'.
© Gunther Deichmann
PORTFOLIO, 18_Cambodia_Kbal Spean_Banteay Srei
Banteay Srei, Cambodia, Siem Reap, Khmer, Temple, sandstone, carvings, intricate, decoration, Angkor, Khmer art