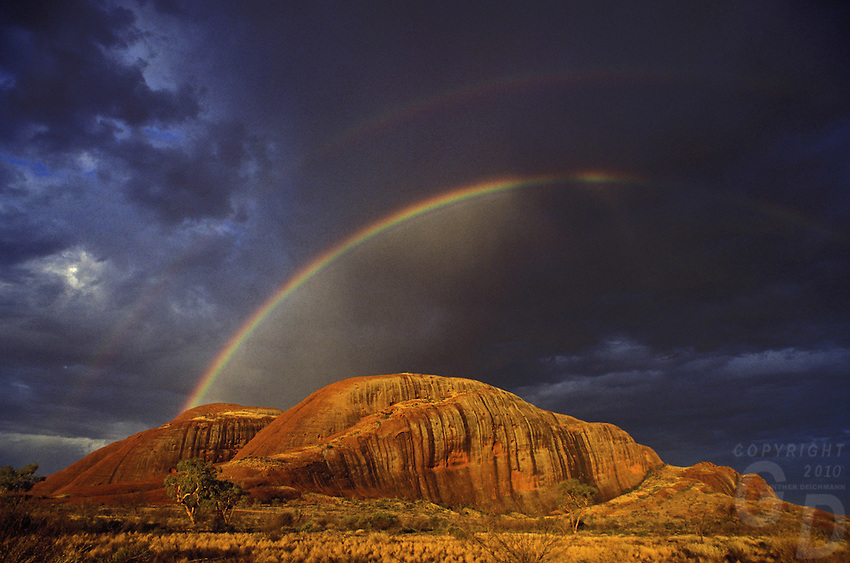 A rare Rainbow over the Olgas, Northern Territory in Central Australia.
It is believed that this is the first and only image ever taken with a rainbow over the Olgas until now. An award winning image published many times shot on Kodachrome film.
it was also use on the Cover of "Die letzten Nomaden" in 2007 by
ARAKI PUBLISHERS, Germany published the book Die letzten Nomaden - The last Nomads of Australia by international Author William J.Peasley the book has been published numerous times in Australia and the Documentary Film received in 1997 a Gold medal at the New York Film Festival. Cover Photo by Gunther Deichmann, a well known and multi awarded image of the Olgas with a Rainbow taken in the Northern Territory of the Australian outback.
Gunther Deichmann
Australia: Landscapes_Outback_Ayers Rock_Sydney_Aerials_Animals
Landscape, Nature, Olgas, Rainbow, Weather, Storm, Rain, Light. Desert, Rock, Uluru National Park, Uluru, rare, unique, Outback, Central Australia, Aboriginal, Land