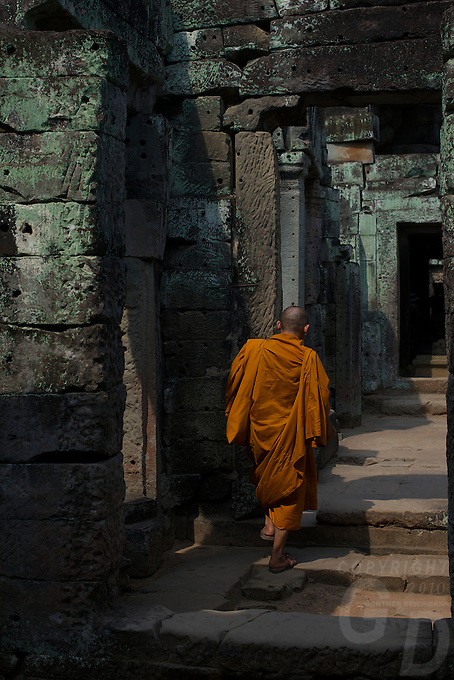 The green algae in Phreah Khan is a microbial biofilms have been found degrading sandstone at Angkor Wat, Preah Khan, and the Bayon and West Prasat in Angkor. The dehydration and radiation resistant filamentous cyanobacteria can produce organic acids that degrade the stone. A dark filamentous fungus was found in internal and external Preah Khan samples, while the alga Trentepohlia was found only in samples taken from external, pink-stained stone at Preah Khan.

Preah Khan was built on the site of Jayavarman VII's victory over the invading Chams in 1191. Unusually the modern name, meaning "holy sword", is derived from the meaning of the original—Nagara Jayasri (holy city of victory). The site may previously have been occupied by the royal palaces of Yasovarman II and Tribhuvanadityavarman.

The temple's foundation stela has provided considerable information about the history and administration of the site: the main image, of the bodhisattva Avalokiteśvara in the form of the king's father, was dedicated in 1191 (the king's mother had earlier been commemorated in the same way at Ta Prohm). 430 other deities also had shrines on the site, each of which received an allotment of food, clothing, perfume and even mosquito nets;
the temple's wealth included gold, silver, gems, 112,300 pearls and a cow with gilded horns.
The institution combined the roles of city, temple and Buddhist university: there were 97,840 attendants and servants, including 1000 dancers and 1000 teachers.

The temple is still largely unrestored: the initial clearing was from 1927 to 1932, and partial anastylosis was carried out in 1939. Since then free-standing statues have been removed for safe-keeping, and there has been further consolidation and restoration work. Throughout, the conservators have attempted to balance restoration and maintenance of the wild condition in which the temple was discovered.
© Gunther Deichmann
15_Cambodia_Phreah Khan_East Mebon
Preah Khan, Jayavarman, Cambodia, temple, ruins, archaeology, Khmer, Nagara Jayasri, holy city, Yasovarman II, Tribhuvanadityavarman, 1191, Buddhist, Jayavarman VII's victory